Panama City is located in Northwest Florida on the Gulf Coast along U.S. Highway 98, south of I-10. With over 36,000, residents, it is the largest city between Pensacola and Tallahassee and serves as the Bay County seat. It is the heart of the Panama City-Lynn Haven-Panama City Beach MSA which includes almost 170,000 people and is the anchor of a 60-mile workforce drive-time area of 573,000 people.

For more than 60 years, Panama City has been home to the Navy, Air Force and one of the largest Coast Guard Stations the continental U.S. Tyndall Air Force Base is home to the 325th Fighter Wing. The Naval Support Activity Panama City serves as one of the nation's top Navy research development and training centers and houses the Navy's top laboratory for mine warfare systems, special warfare, diving and life support.

Panama City connects to the world through the newest international airport built in the U.S. in more than 15 years. This state-of-the-art airport is served by Delta and Southwest Airlines with connections to popular U.S. and international destinations, as well as direct service to: Atlanta, Memphis, Baltimore-Washington, Nashville, Houston, and Orlando.

Port Panama City is a growing deep-water gateway port that provides modern seaport facilities for bulk, break-bulk and container cargos. It is a Free Trade Zone and offers rail connectivity to the Continental U.S. on the Bay Line Railroad. 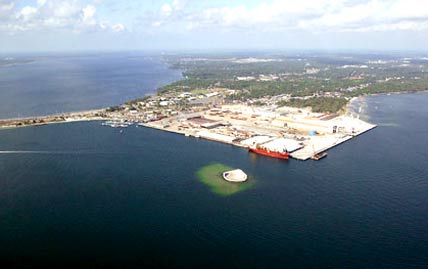